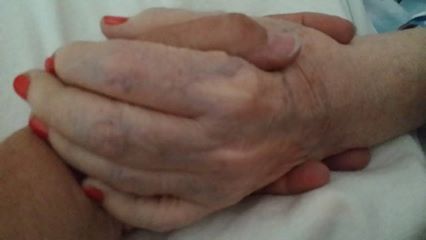 The pendulum is swinging, and with it comes a promise of freedom!

Freedom from stuff! Freedom from bulging closets and overstuffed drawers. Freedom from colored plastic totes, methodically organized and labeled, but full of even more stuff!

You see, I’m the daughter of a ‘saver-of-everything’ – one with almost hoarder status, by today’s standards! My mom was a depression baby and the oldest of a large family. She saw the difficulties of putting food on the table for ten! She saw her mom stretch the staples, mend the hand-me-downs, and make do with very little! So my mom saved everything in case she needed it…someday!

Her mother’s mantra has echoed through the generations, and for my mom, it was justification for saving stuff!  “Use it up! Wear it out! Make it do! Or do without!”

In today’s throw-away society, that mentality is unheard of, but I’ll admit it – within me (because of that echoing mantra) there’s a fierce storm which cycles between purchasing and purging; stashing and trashing! While I recognize the need to downsize, and see value in a more simplified lifestyle, the storm brews inside!

But today, I saw the pendulum has moved!  And, I’m lovin’ it!

Somehow, I think it’s related to my newfound freedom from the overstuffed body I’ve had for decades.  Losing nearly sixty pounds is the impetus for my most recent purging. Today I took four large garbage bags of plus-size clothes to a local thrift store. One hundred and thirty-one articles of clothing, all of which I tried on yesterday! And, all of which are too big! Oh my goodness!  Unbelievable!

As I drove away today, I realized the movement in that pendulum is also related to that thrift store! It was my third trip with donations (not all clothes!) in the past few weeks, and I’m feeling good about giving away good things, even new things! You see, I know who opened this store, and I also know the proceeds support their ministry in South Africa. And for me, knowing my purging is helping orphans in Swaziland makes that pendulum swing a little more freely!

A few years ago, I quit my job to help my mom downsize – something she knew needed to happen. Her health was failing, so I could help with her physical needs, too, but downsizing was definitely in my plans! But, it wasn’t in hers! She wasn’t ready.  And, when she was, she wasn’t able. Ultimately, my mother passed away. Her much-needed downsizing never happened, so now, I have even more downsizing at my house!

It’s a challenge, but the pendulum is swinging, and it feels so good!

And, yes! My daughter will thank me!

Welcome, I’m Elaine. I’m a follower of Jesus Christ, a choreographer of words, a challenger of the status quo, an admirer of all things colorful, and a lover of life who finds great comfort and joy in knowing I’m completely adequate to do whatever it is God calls me to do!

You have Successfully Subscribed!

your information is safe and will never be shared.